Start a Wiki
Akindo is the name of the school club that the main cast created and is part of. They spend a lot of time creating things and good memories together here. Sometimes referred to as a society or research group.

On the first day of second year of High school, Mikako with her friends and Tsutomu with his friends, independently from each other, decided to create their own school club. While girls were discussing what they want to do, Tsutomu found them and invited to the already created by him, Yuusuke and Jiro club named "Akindo. Anything can be made and sold club". Akindo sounds like engrish version of expression "I can do". But it means "merchant"[1]. The concept of the club is whatever new goods, that you can make, you can sell on the Fea Market. Perfect idea for creative minds. Mikako, P-chan and Risa liked the idea and joined the club. Shintaro found them in the crowd accidentally and asked to join, because he liked the concept too. He was freshman and they were very surprised, that he turned out to be Mariko's younger brother. Then, they invited Mariko too. For some time Mariko's apartment was their club room.

Later, Tsutomu was looking for a place where they could make a sign of their group for Flea Market. His classmate Ayumi agreed to lend him storage room in the barn of her family. She helped out them a lot and they invited her to join the club too. The storage room became their Club room or Akindo studio or workshop.

Akindo ceased its existence at the end of march, when Mikako left for London. Month later, Akindo's workshop was dismantled because Ayumi's family, for various reasons, sold the field where the barn stood. The rest of members, despite they said they will, but they never took part in the sunday Flea market again.

Tsutomu created giant sign figure for Flea market, that became club's mascot. It was named Angel Berry-chan because it looks like a girl with a berry as a head and wings. Tsutomu was inspired by Mikako's Happy Berry brand logo, that has shape of a berry with wings, to create this sign. 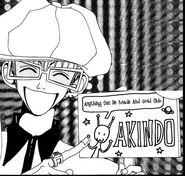 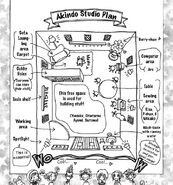 Add a photo to this gallery
Retrieved from "https://gokinjo.fandom.com/wiki/Akindo?oldid=5395"
Community content is available under CC-BY-SA unless otherwise noted.